I can bet that when it comes to art, pretty much all of us found themselves a “key” which changed everything. For a lot of kids, that key was Harry Potter, which opened their minds to literature. Ivan Orkin, the world’s top ramen guru, discovered his calling when he was served rice with a freshly beaten egg and nori flakes – it introduced him to the elusive fifth taste, umami.

When it comes to video games, that key for me was Planescape: Torment. For a young punk, who previously only ran around in platformers and reveled in the total mayhem of Grand Theft Auto III – with no regard for the game’s various contexts – the encounter with Torment was something else. Here you go: a game which forces a kid to read and consider more text than any of his required reading combined. A game which asked a barely teenaged boy: what can change the nature of man? Moreover, it actually asked him to give an answer with one mouse click. I didn’t get everything during my first time in Planescape, but I couldn’t look at video games the same way after Torment. I reckon that I’m not the only one.

So it’s not hard to see why Torment: Tides of Numenera had some giant shoes to fill. It doesn’t matter that it was crafted by largely the same people behind the original: honestly, on one would be much surprised if they failed to deliver something satisfying. And yet the thought that they could fuck this up for us was paralyzing.

The very foundation of Torment was the unique world of Planescape – it’s not coming back for a variety of reasons, so a new one was needed, just as ambitious and crazy. This tale of suffering takes place in Monte Cooke’s Numenera RPG system: on Earth, about a billion years in the future after the fall of several advanced civilizations, including ours. The universe strictly adheres to Arthur C. Clarke’s Third Law: „Any sufficiently advanced technology is indistinguishable from magic”, embodied by the titular numenera – remnants of ages past, powered with mysterious force over many years. Similarly to Planescape, things generally work because they of course they do – the setting is more concerned with attractive, clever ideas than technicalities. It’s why Numenera is rife with such concepts as the Bloom, a thinking organism with its very own urban and portal infrastructure, guard golems of the Sagus Cliffs built from a unique type of clay: exactly one life of every single citizen or a blast furnace that used to be a spaceship. That last picture perfectly captures the game’s peculiar genre and visual mix, where seemingly random elements combine into something fantastic. The 2D landscapes are very pretty, curiously designed and the 3D characters blend in perfectly with them – Tides of Numenera does a much better job at emulating the look of classic, isometric cRPGs than recent Obsidian productions. Hell, I’d say that the only game I can compare it to is Planescape: Torment itself. 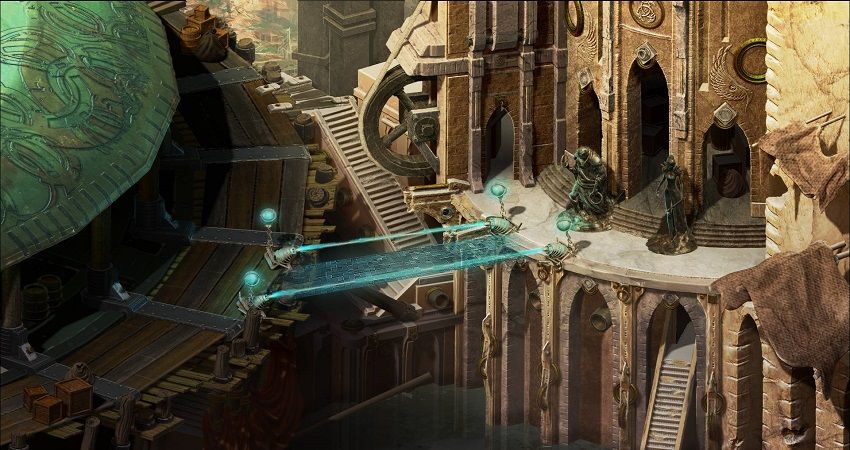 The story concerns the Last Castoff, the supposedly final “child” of the Changing God – a mysterious human who achieved quasi-immortality thanks to bodysurfing. Whenever he exits a body, a new, fresh soul enters it, burdened with the sins and past of its unwanted father. As the Last Castoff, you don’t remember a thing, but you quickly learn that even falling from the stratosphere cannot properly kill you and that all the Castoffs are hunted by the Sorrow – you can assume that you and your brethren are just pitstops in its pursuit of your father. As you wake up near the Sagus Cliffs, a city whose fate is closely interconnected with the Changing God’s, you embark on your own journey to find what you were and what you’ll become. Your primary companion is the mounting feeling that your very existence brings suffering to those around you.

Amnesia, remnants of a forgotten past, troublesome immortality, a quest for identity, regret… Torment’s main themes echo loudly throughout Tides of Numenera – once again, we’ve received an ambitious deconstruction of narrative and gameplay tropes commonly found in cRPGs and fantasy. The first Torment asked: what can change the nature of man, this one ponders what does one life matter; as such, the issues of death, legacy and one’s role in a supposed Grand Plan accompany you from the very beginning of the game. An intelligent robot wants to sacrifice itself to create “children”, not knowing how much one of his crewmembers values his life. A rebellious golem laments that he was created with a terrible year, demanding a better one – even though he’s supposed to be an emotionless simulacrum. Every death sends the Last Castoff to the Labyrinth, a mental construct in their head and a potential home for both the Changing God’s past incarnations and completely separate beings.

Apart from thematic parallels, the game is littered with clever references to the original. The world of Tides of Numenera is ravaged by an endless world, but instead of angels and demons, this time it’s between the mercenary armies of your father and his “firstborn daughter” – even though no one has seen both of them in ages. Once again, Chris Avellone hid aspects of Ravel Puzzlewell, his blind hag in some of the kind women on your path. In the Fifth Eye, a bar for psionics in a derelict factory, you can drink a variety of fantastic drinks, just like in the Smoldering Corpse Bar; you can even find O, the living manifestation of the eponymous letter. I got teary-eyed when exploring the previously-mentioned Bloom, a reminder of Sigil’s intelligent, shifting streets. It doesn’t really matter if it’s intentional or not; this Torment reminds you of the original in truly touching ways. 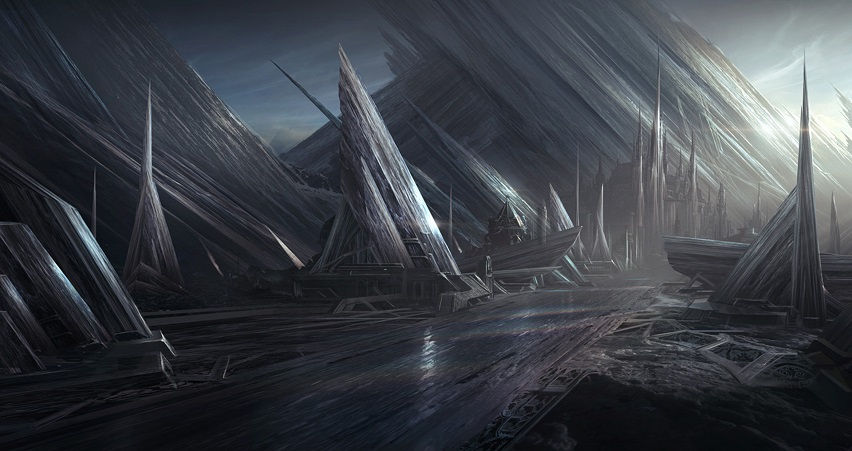 Another thing works after almost 20 years: the script. The story is a smart, beautifully written – and I mean that literally, because Tides of Numenera’s narration and dialogue are a joy to read – with a philosophical bent you rarely get in games, populated with a cast of colorful characters, including your party members. They perhaps aren’t as memorable as the original’s misfit crew, but you still get gems such as Erritis – half-warrior, half-cretin, forced by a supernatural power to be literally suicidally heroic. The game deserves a proper thumbs up for its finale, ambitious both in narrative content and gameplay beats, which manages to hit the sweet spot between giving answers and leaving things open; even though inXIle once again proved that they fail at giving players proper glory rounds – like a final visit to the previous game areas or a chance to say goodbye to your teammates. The dialogue and quests are crafted in a properly oldschool manner, showing the damage Bethesda has done to cRPG task design, turning them into patently obvious checklists. The quests require careful thought and examination of the very well done journal – missions in individual locations are connected by a wide web of associations and they usually offer a variety of different, often contradictory outcomes. This last bit is especially evident in retrovisions, story sequences inspired by choose-your-own-adventure books in which the Castoff relives the memories of other people and has the opportunity to change history. These tales are one of the game’s juiciest bits and it’s a shame they didn’t receive better visual treatment: the HUD looks messy and the accompanying illustrations are often of dubious quality.

Mercy is for the weak

Planescape: Torment’s largest, well, torment was its clunky gameplay. Combat was plentiful, but unwelcome due to the already outdated Dungeons & Dragons ruleset, which also barely figured into the game’s narrative focus. Numenera ends up being a much better system for the kind of cRPG Torment is, with some mechanics adapted almost verbatim. Dialogues and actions are supported by the pool and effort system: each action in and out of combat requires the player to spend points  from their Might, Speed and Intellect stats to increase success rates. Spending points has consequences, as it reduces the character’s capabilities such as damage or range, and the pools can only be restored through recovery items or sleeping. This way, the game encourages experimentation and different approaches to maintain the pools, often rewarding the player for failed skill checks. While the game does get fairly easy towards the end by allowing a lot of stat increases, it’s not an issue – ultimately, the goal is to make the game’s narrative sequences more engaging and give numbers more meaning. What is a bit less enthralling is the game’s Tides system which governs karma depending on the Castoff’s decisions. The Tides play a gigantic role in the plot, but their gameplay nature is poorly explained and looks as if certain Tides are influenced much easier than others.

Combat has been completely reworked: instead of constant battles, the game relies on about a dozen encounters called “Crises.” When a Crisis begins, gameplay becomes turn-based and the player has to resolve it through combat, manipulating the environment or even discussing with his enemies. Raw combat is intuitive and fairly fun, with the various damage and armor relations well explained. Your primary supernatural assist are ciphers – powerful, one-time use numenera that punish you for holding too many on your person. This way, the game discourages hoarding and invites you to settle scenarios with them as early as possible. Crises are creative in design, with stealth, negotiation and escape scenarios with plenty possible routes – a hostage negotiation can easily turn into a bloodbath, I’ve also completely bypassed several of them through persuasion. Every Crisis has its own rules and while this makes them a bit “gamey” and not as flexible as it’d be desired; it’s possibly the best adaptation of the pen-and-paper atmosphere to date.

Immortality is only a word

There’s one question left: how it stands against the original? It’s not a binary question of right and wrongs and you can’t weigh a fresh game with a legend – the key’s been found, the door’s been opened. So let me take a different stab at it.

When I travelled through strange places, read fantastic stories of the characters on the way in my escape from the Sorrow and my pursuit of the Changing God, I felt as if I’ve met an old friend I haven’t seen in years. I’m not sure if I’m talking about Torment or that little kid who tackled a game smarter than he was. And when my journey through the world of Numenera ended, I imagined those two Torments on a shelf, next to each other – and I thought that the younger one can hang with the elderly.

It’s simply put, a beautiful game. And a great comeback.

The new Torment is a touching, beautifully written comeback of a legendary name – with proper respect towards the original and the courage to play with its weaknesses.

Tides of Numenera still could be prettier in spots, more open, more polished – especially just before the credits roll or in terms of voice acting.